They come in a variety of colors and are overall beautiful dogs. The average life expectancy is anywhere from 12 to 14 years.

History of Labradoodle's Puppies for Sale

The term labradoodle first appeared by Donald Campbell in 1955 but did not gain popularity until the Australian breeder Wally Conran started breeding them as a guide and service dog. They are now widely used as service dogs, as they have the confidence of a poodle and the affection of a lab. They can work with various needs, from PTSD to blood sugar alerts and everything in between. They originate in Australia but have since become one of the most popular mixes.

Labradoodles are happy and easy to train, making them great family pets. They are often described as social, sweet, devoted, and playful. They are easy-going and not aggressive, so they won’t make the best watchdog or protector. Due to their gentle nature, they are great as therapy dogs for people with autism, depression, or other physical disabilities.

Where will the Labradoodle Dog to buy feel best?

Labradoodles typically do not do well in apartments. As a high-energy crossbreed, they need much space to run around, so you’ll want to have a big backyard or live close to a park to run them around. They do well with cats and other dogs, but socialization is essential to their temperament to other animals from a young age.

Labradoodles will get along well with children of all ages, making them terrific for any family.

Grooming an Labradoodle Dog for sale

Labradoodles typically don’t shed much and are pretty hypoallergenic with a tightly-curled coat. You’ll want to set a strict grooming schedule to stay ahead of any mats and tangles in their fur. They will need to be brushed 2 - 3 times a week with a slicker brush, with particular attention to the undercoat, which can often mat without your knowledge. You’ll also want to clip their nails and clean their ears once a week to prevent infection.

Exercising an Labradoodle Dog to Buy

Labradoodles are a high-energy breed, so they need lots of exercises. They love to swim and will need at least an hour of exercise daily. Too much training for a labradoodle puppy can lead to joint and bone issues, so take it easy for the first few months.

Labradoodles are very agile, so they incorporate hurdles, weaving, and tunnels into playtime to keep their brains active. They are also very obedient and relatively easy to train as they want to please you.

Nutrition for an Labradoodle Dog to Purchase

Adult Labradoodles need food with at least 18% protein, and labradoodle puppies need 22%. You’ll want to get food with whole grains, fatty acids, and fiber. They can have sensitive stomachs, so you’ll gradually want to switch to any new foods. We love the Blue Buffalo dry dog food for adults.

Labradoodles' three main types of allergies come from fleas, foods, and the environment. They could be allergic to grains, specifically wheat, so you might want to opt for a grain-free diet. Other allergens can be from soy, corn, and rice. Pay attention to how your labradoodle reacts to their food, and consult your vet if you have any issues. 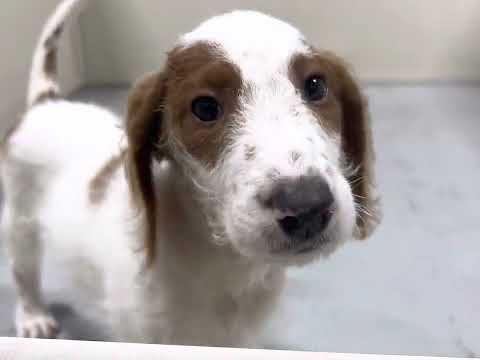