Weighing between 12 to 18 pounds, small, yet sturdy, the Bichon Frise is known as one of the world’s greatest ‘personality dogs’. A cheerful, charming, affectionate dog, the Bichon Frise boasts beauty and intelligence. Bichon’s are notorious for their hypoallergenic, velvety soft, plush white fur. The breed is often compared to a cotton ball due to its curled double coat, which consists of a textured outer coat and a silky undercoat. The coat must be white, but may have shadings of buff, cream or apricot around the ears or on the body. An average size Bichon will stand just under a foot tall at the shoulder. These adaptable companions get along well with other dogs and even young children. Intelligent, alert, and curious, Bichons make ideal companions for city living. They are known to live between 14 to 15 years.

The Bichon Frise has survived world wars, revolutions, and the fall of empires. The breed originated on the Canary Island, Tenerife, in the 13th century as a descendant from the Water Spaniel. Traded by Spanish sailors and transported from continent to continent, the breed eventually became a favorite among royals and European nobles around the Renaissance. Bichons accompanied the royal courts in Spain, Italy, and France. Upon the French Revolution in 1789 the breed’s benefactors were imprisoned or hanged, leaving many Bichon’s abandoned on the streets. However, the breed’s intelligence, agility, and trainability made them excellent street and circus performers.  In 1956, a married couple from France brought six Bichons to produce the first Bichon littler bred in the United States of America. Shortly after, they succeeded. In 1964, the Bichon Frise Club of America was founded in San Diego. The American Kennel Club fully recognized the breed in 1973.

Described as peppy, curious, and playful, Bichon Frise puppies are agreeable in nature, but can be hard to house train at first. However, in every other respect, they are quick learners, and respond very well to positive reinforcement rather than harsh or negative methods. Bichons love to learn and perform new tricks. As with all breeds, early socialization and puppy training classes are recommended. They are highly motivated to please their owners. Highly spirited, and playful, the Bichon puppies’ antics will keep you entertained for hours. Like any other puppy, Bichon’s should not be left alone for extended periods of time.

The hallmark of this breed is a cheerful attitude. Known for their even temperament, gentle manner, and affectionate attitude, these dogs make ideal therapy dogs. Bichons are immensely loyal to their chosen human and eager to please them. They tend to get along well with young children and other dogs. Their intelligence and obedient nature makes them trainable companions. Their size and temperament allows for easy apartment or city living.

Where will the Bichon Frise Dog to buy feel best?

Bichons love playtime. However, they don’t require a lot of hard exercise. Alert and attentive, they make good watch dogs, but are lovers not fighters when meeting strangers. Their temperament and size make them ideal for apartment or city living.

Their low shedding, “hypoallergenic” coat is maintained best by daily brushings at least 2-3 times a week, and routine scissoring once a month. A comb every other day will help keep their coat pristine from dirt. To maintain their snowy white coat, frequent professional grooming is recommended: a bath, trim, and a clip every 3-4 weeks to avoid forming painful mats.

People pleasing and playful, the Bichon are long-lived dogs that require daily, moderate exercise. On average, they’re classified as “somewhat active”, meaning they require daily play and walks. Often, long stretches of calm are followed by brief bursts of activity and/or running. Bichons often enjoy participating in obedience, agility, and rally competitions. These creatures are exceedingly fast, so a backyard with a fence is a good idea. 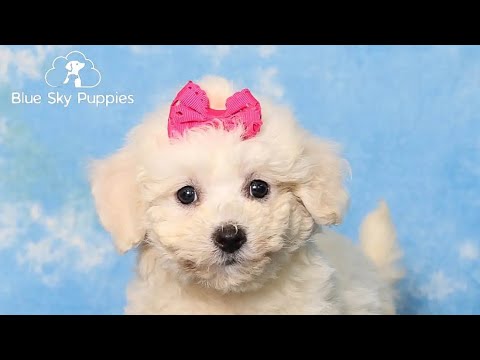